Registered with ASAHI PENTAX as a professional photographer

Ever since my first landing to this continent country, Australia in 1988, I became very attracted or almost obsessed to this continent.
I decided to end my life as a Salary-man (a company employee) in Tokyo and became a freelance professional photographer. I selected Australia to take my first step as a professional photographer. My decision to travel Australia at the time was based on a very simple reason. I simply thought that as Australia is the oldest continent on the earth I could see landscapes, sceneries, wildlife that I have never encountered with in any other part of the world. I spent three months travelling approximately for 18,000 kilometres by my motorcycle. It was camping trip mainly travelling Australian Outback. I slept under the stars every night, lived with the Sun, and travelled with the winds. I felt the toughness and harshness of nature under the extreme heat of Outback. I also felt depth of friendships from my Australian friends. We sang and laughed together. It was great.

The sceneries, the sunrise, the clouds, the sunset, the moon, the stars … All things I saw everyday were beyond imagination. I felt that it was all created for me. There were so many things that I could not experienced in Japan and so different from what I am familiar with, I became obsessed with the dynamics of Australia by the time I had to leave. I also became aware of my mission as I felt strongly about the earth as living thing and diversity of its environment and history are beyond our comprehension. I believe my mission is to document various form of expressions of the earth. I want to photograph not simply landscapes but also to capture the spirits of the earth with honor. 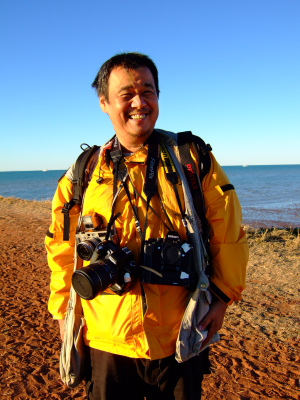 Since that time, I have been photographing Australia for 20 years. I have a ritual that is to communicate with the nature by bush camping. This has been keeping my body and soul in great form. I need to be accepted by the nature and be humble and honored to be given the opportunities. It seems that rocks, trees, waters, and desert are telling me to photograph them and I am merely taking the shots. I am a storyteller that existed in ancient Japan. I feel that I became a medium to pass the images of the earth on to the future generations.

I have been photographing Tasmania extensively since 1998. On my first visit to Tasmania, I felt stronger sense of depth and richness of spirits of the island than the mainland Australia. It almost made me feel like all living things on the earth were created in the island. Even after returning to Tokyo, the essence of eucalyptus forests that my body absorbed sunk even deeper in my body. I felt like I was becoming a part of the forests and returning to my origin. I feel that the more time I spent in the island, the more I see spirits in all things such as trees, rocks, moss. I feel that each small spirit is forming the spirit of the island of Tasmania. I hope my photographs will give an opportunity to feel spirits of Tasmania, Australia and our mother earth and I strongly hope we could pass this beautiful planet to the children of our future.